The stories of thousands of lives saved are preserved within the walls in the home of Dr. Michael Vlado . This imposing building is located on “ Puldin “ in the Old Town and was built in the early 19th century in the style of early asymmetric houses. The three-storey building is located on the west side of a small courtyard open to its facade.

The staircase leads to a balcony on the second floor, which has a magnificent panoramic view of the city . The rooms are richly decorated with carvings openwork rosettes , wooden ornaments for more than 200 years old and built in cupboard . In the former host of the famous Plovdiv Healer and is still preserved ceiling , which is a real work of art. Floral ornaments , handmade from wood, painted in orange , green, blue and yellow. LAMPS even brought from one of the many trips to the doctor Vlado in the world, combining wrought iron with glass Ferris .

Dr. Michael Vlado was born in Plovdiv in 1828 with the help of his wealthy relatives by the famous family Gyumyushgerdanovtsi graduated in medicine in Vienna. Returning to his hometown quickly gained the trust of its customers. Begins to heal completely free plodivchani poor who even displayed free drugs from their pharmacy “ Galena .“

From 1862 to 1877 he was chief physician of the city. At that time he started the first private hospital in the city.

During the April Uprising Dr. Vlado saved from certain death hundreds of Bulgarians thrown by the Turks without trial in prisons or abandoned in shelters and inns . The doctor cured of fever and Ivan Andonov, one of the most – active participants in national liberation struggles in the Plovdiv region.

In Soviet times the house was turned into one of the iconic places „Balkanturist “ – “ Thracian Inn .“ In the late 80s of last century, a fire broke out in the building and part of the house and yard are destroyed. The
lesions are forfeited to this day. Currently the house is a cultural monument and its run by the “ Corporation compound .“ It was restored in strict compliance with all elements of its original appearance. Worked as a host , kept the name „Thracian Inn ,“ where guests can stay and drink a cup of tea “ Tea “ or dine in the restaurant. 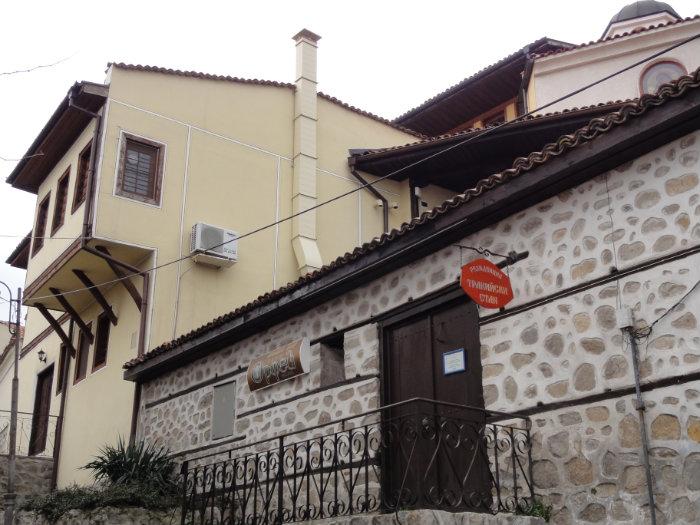